A more correct question would be whether harness or dog collar is most adequate for our Borders.  And it’s a a question that has been buzzing in my head since we virtually adopted our Indy, but more so since we joined our virtual group of the #BTposse.  Here is where I first started noticing that most Borders were taken for walks wearing a harness.  Eventually we learned, possibly too late after Indy injured his back, the reason why possibly a harness is the best choice for Borders.

The Inquisitive Nature of Border Terriers

It appears I am not the only one to ask myself this question, mind you.

Lately I have come across quite a few forums that have sparkled debated conversation threads about whether a Border should be made to wear collar and lead, or whether (s)he should be held on the leash from a harness.

Some owners seem to think that Borders are particularly bad at heel walking for as good they are at pulling.

If you already have a Border Terrier, I am sure you will agree with me when I say that Borders have the most inquisitive nature ever.  Like most terriers, Borders were originally bred for hunting vermin.  Their inner instincts therefore switch on and take over whenever they see small creatures, or even things, scatter about.  It was only a couple of days ago that Indy started growling at a white tissue flying at ground level on the street during a windy spell.  Yes, in spite of his older age, my Indy can still be a ‘silly’ boy 🙂

Does this necessarily mean that Indy Borders do much pulling during walks?

My experience tells me otherwise.

As I say, I can only talk by experience.  But it is not solely the experience I have had with my Indy, but also what I have noticed when coming across other Borders and when hearing from their owners.

As far as I am concerned, Border are very good at heel walking.  Yes, admittedly my Indy likes to walk slightly ahead of me, but that is purely because I let him do so – yes, I know, bad trainer!

If at all, when taking a Border for a walk, you must be prepared to allow him or her to do a lot of sniffing – but this can vary also depending on the season and on the weather.  In spring, or when the weather is windy, a Border will naturally do much more sniffing.

However, a Border is very much renowned also for his or her high level of trainability.  Particularly when entised with treats, a Border can be easily trained to take on virtually any type of behaviour or action.  And this is because, as I have often said, Borders love to please their humans.

The secret is to train your Border to walk on heel from a very early stage or, if adopted, from as soon as you start taking him or her for a walk.

But … things can go wrong.

Border Terriers must be kept on a lead at all times

Again, experience has prevailed here and, as far as I am concerned, tow poignant incidents with Indy taught me best.

I have to say that both of them took place in the early days of us having Indy.  The first one was during one of our first walks in the woods.  Indy was off the lead and nicely walking to heel with us, when some scattering in the undergrowth grabbed his attention.  And off he was, never to be seen for quite a few minutes, in spite of our desperate attempts to recall him by whistling and by calling out his name whilst we were searching in the undergrowth ourselves.

The panik mode didn’t last more than 5 minutes, but I can guarantee that they were some of longest 5 minutes of our lives. 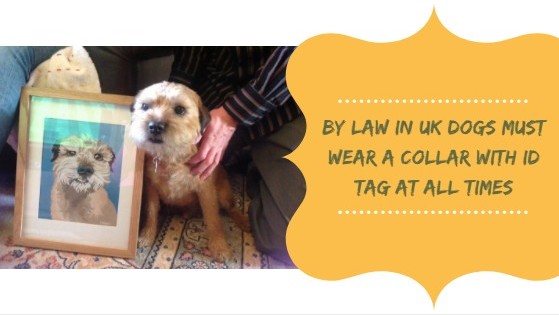 Suffice to say that Indy did come back to us, but what we still think took that best of his attention span was some squirrel or other creature that awakened his inner hunting instincts.

The second very similar incident took place in an open space.  Funnily enough, I was training Indy on recall, and had him off the lead.  I walked away from him to a distance, and called him to me enticing him with a treat.  I remember he came running to me like a lightening, but as he turned, he noticed a dog (which his scent probably picked as not neutered, hence threatening his dominance) and started running like a lunatic towards that dog … yes, wanting to fight with him.  The other dog’s owner tried to protect his dog by trying to keep Indy away, but to no avail.  Indy would not let go of that fight.

Again, thankfully it all ended well.  But the other dog’s owner was not best pleased with me – and rightly so.  I was mortified.  In fact I was in tears.  How could my lovely and docile, mild-natured lovely Border have turned into such a vicious robotic machine?!?!?!

To this day, we know that Indy made no attempt to bite the other dog, but his inner male dominant instinct possibly felt threatened and he just went for the other dog, trying to bark him off what he thought was his territory.

Further to these two incidents, we kept our Indy on the lead at all times.

Border Terriers’ body makes them NOT suitable for lead on collar

The final thing to bear in mind is Border’s physical attributes and abilities.

The body of a Border Terrier, when not overweight, is naturally slender, as it should be thin and agile enough to be able to penetrate into burrows, or in nucks and crannies to catch foxes or vermin out of their hole.

Likewise, Borders are indeed deemed agile and particularly fast, as not too heavy at all on very skinny but muscular legs.  For this reason, they can be really fast in twisting their body when you try to control them on walks.

Don’t get me wrong, a Border will hardly try to ‘squeeze’ away from you.  But I am referring to those very rare occasions when you are trying to restrain your Border away from another dog that (s)he might not like.  If you already own a Border, you will know what I am referring to: your Border will try to twist his or her body, trying to reach out to the other dog from another direction.

By doing so, if you hold your Border with the lead hooked up to the collar, you will have no control over your Border’s body, hence allowing your Border to twist.

This could cause your Border to injure his back.  This is exactly what happened to Indy two years ago, and it’s certainly something that you want to avoid for your dog.

Control your Border on a harness

Now, as mentioned, and especially since Indy injured his back in 2016 (no worries there, but he was lucky and recovered by himself with 8 weeks of absolute rest), I have been wondering whether Indy’s injury could have been avoided, had we introduced him to a harness from his earlier days.

However, I have been visiting forums on Border Terriers to find out what the general consensus is amongst more experienced Border owners and breeders.

BORDER TERRIERS ARE BEST WALKED ON A HARNESS.

Does that mean that they need restraining?  Are they pullers?  Absolutely not!!!

As mentioned earlier, Borders are in fact very easy to walk, and to walk to heel too.

I have recently come across some currents of thought of a few years ago, which suggested that Borders should in fact be held on a leash by a martingale collar, or through one of those grooming nooses, which are also used for grooming.

The idea behind this principle was that this way, you would control your Border’s nose, hence stear him or her away from trouble.

These comments, funnily enough, all heightened in the shadow of the television series Dog Whisperer, where Cesar Milan showed all it took to control a dog was a high neck noose.

However a more recent approach has been recognised in possibly adopting the other teaching preached by Cesar Milan, and avoid boredom for Borders by keeping them well exercised and interested.

After all this debating, my conclusion is one, and one only: we walk Indy on a normal bog-standard harness.

I do believe that exercise is paramount to Border Terriers, but so long as it is embraced by your dog.  You should never force your dog to walk for marathons if (s)he is not happy with it and wants to go back home.

Also, walks is mostly where your Borders may show signs of not listening, as natural instincts may take over.

But this does not mean that owners should use martingale collars or high nooses, with the sole purpose of choking your dog if (s)he pulls towards the forbidden pray.

A Border should be controlled in a safe manner, so as to avoid him or her unwanted injuries.  Holding your Border by a harness will also help his or her owner to pull your dog behind, i.e. away from other dogs, rather than up, i.e. on his or her paws, which could send other dogs the wrong signal that your Border wants to attack them.

Borders can be dominant – but they happen to be the most docile of all the Terrier breeds.  I believe that good training and bonding exercise indoors, with you playing with your dog in a constructive way, is far better and more rewarding for your Border and for you when you walk together too.

Let me know what your experience is of walking your Border?  Is (s)he a puller, or does (s)he or you prefer the aid of a harness?  Drop me a line below in the Comment box, share with us!