Yes, I know. Since I first launched this website over two years ago, I have not tackled the ever so important subject of training. But it has been your many requests that have finally pushed me to look into this. And now I am ready to talk to you about what I think are the best ways of training Border Terriers.

Before I get to talk to you about what I learned, let me clarify one thing. Which is exactly this. I learned about dog training, and decided what I thought was the best technique to train a Border, purely through research. I do not hold any qualifications in dog training. Nor have I have completed a dog training course. 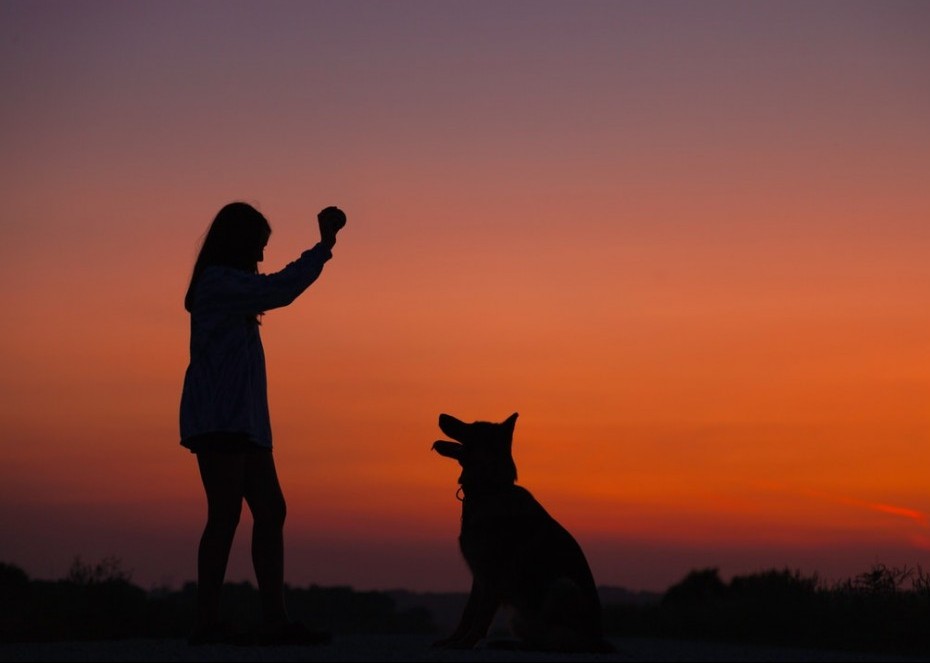 The other reason why so far I have been quite ignorant on the subject is because, truly, we never needed to take Indy to dog training classes, or to behavioural problem classes.

When we adopted Indy, he was already an adult dog, and he was – and still is – most well-behaved around the house, and on his walks.

Yes, like all Borders, Indy at times has had arguments with other dogs. Yes, totally unprovoked arguments, but part of the territorial instinct typical of all terriers, and more particularly of Borders – or so we have always been told.

The reality is that Borders are generally speaking quite balanced dogs and they are problem free. If you haven’t read much about personality traits of Border Terriers, follow this link.

Now, my research has led me to believe that training should be started as soon as possible on pups, or on older dogs that have never been trained before.

Likewise, there are different types of training plans that can be applied on a dog, depending on what the dog’s needs are. Is the dog aggressive towards humans or other dogs? Or does (s)he look frightened? Is the dog depressed, or just keeps running away?

Now, these are bigger issues than purely following the basic house training rules. When issues hint to behavioural problems with a dog, then a different approach may be required.

So, let me talk a little more about the different types of training.

After reading so much about it, I came to the conclusion that there are two main types of dog training: punishment based training, and reward based training.

This training focuses on punishing the dog for his or her bad behaviour.

This is the type of training which sometimes Cesar Millan applies. Cesar does not use corporal punishment. However he is renowned for creating a startling situation in the dog, which will surprise the dog and distract his or her mind from focusing on the bad behaviour. Cesar does so by nudging the dog on her or his flank, hence creating that element of surprise which deters the dog from repeating the bad behaviour.

However, I see this training more apt to dogs who have more advanced behavioural issues.

Negative punishing training, on the other hand, focuses on removing the object that causes pleasure in the dog when the dog misbehaves. If your dog enjoys tearing the cushions apart that you like to keep on the sofa, remove all cushions in the house, or store them where you dog cannot reach.

Likewise, if you dog likes to sneak outside in the garden and starting barking at neighbours, prevent her or him from going in the garden by locking your dog indoors.

However, my question with this latter type of training, is that it may become more difficult to put in practice during walks for instance. If I think of when Indy used to bark at other dogs when he was younger, according to this training I should have avoided other dogs altogether, which in my opinion would never teach a dog to become more sociable.

This type of training is, I would say, the most diffused, at least in UK. Many advocates of these training have filmed televised series both in UK and in the States, to the purpose of proving how much more successful this type of training can be. One of the most successful supporter of this training is Victoria Stillwell, who has also written a number of books which you may find of help.

Reward training is based on rewarding your dog for doing the right thing. So, for argument’ sake, in Indy’s case, I should have rewarded his good behaviour whenever he didn’t bark at other dogs.

The reward can be in the shape of many things, such as toys, or even a simple ‘Good girl’ from you.

Likewise, you can train your dog to recall or to go outside for toilet, or – as we did with Indy the two times – to learn how to use the garden flap, by showing her or him the reward as target, or as finishing line.

However, some dog owners find this type of behaviour not assertive enough in snapping out their dogs from unwanted behaviour.

So, after so much talking and classifying the different types of dog training, what do I think it’s the best training for Borders?

Let me reiterate that we have never taken Indy to training classes, nor have I gained any qualification yet. So, my deductions are purely through experience of sharing my life with our Indy.

In training Indy we have always adopted a mixture of reward based and negative punishing training. And, rightly or wrongly, we feel it has worked most of the times. 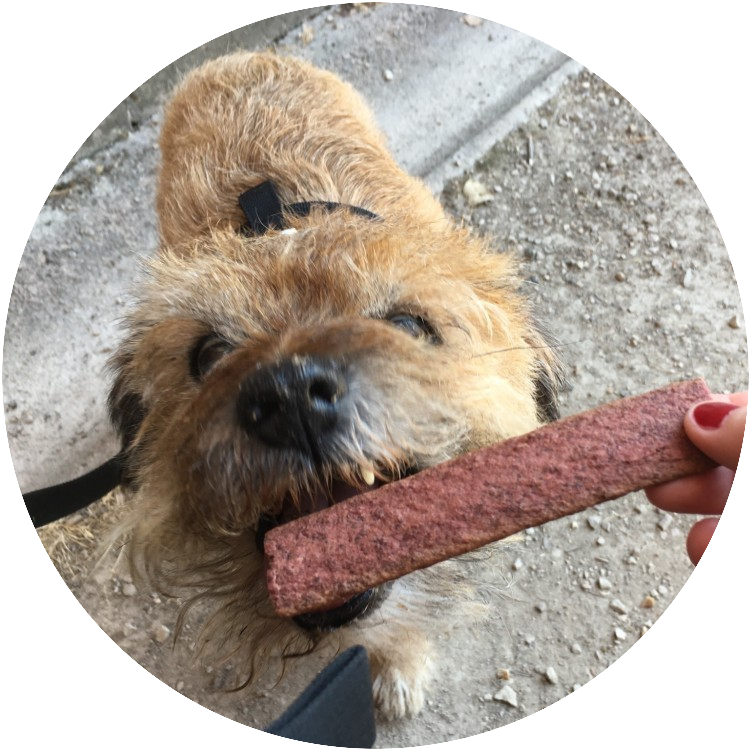 Borders are terriers and love their food. If you are Border owner, I am sure you will agree with me.

At the same time, we found that with Borders – and indeed with so many other breeds – once they have learned their house training at the beginning of their lifetime, this training will stay with them for the rest of their lives. Just like with children.

This does not mean that Borders cannot be trained when they are older. Remember, Border Terriers are highly intelligent, and we found that we could easily train Indy when he was 11 and we moved to this new home. In spite of his already advanced age, he learned the ‘new ways’ of the new house in a very short time.

Talking of training your Border, you may interested in these:

However, we must not forget that Borders are also the most ‘terriers’ of terriers. They are stubborn and independent. And if they decide to get up to naughty, they will, regardless of how many times you call them back or however big treat you are waving at them.

With Indy we found that, as he loves his food too much (yes, a few yeas ago he had to be on a diet, as he had piled a few too many pounds), when we were training to disregard other dogs for instance, he would stop for 2 seconds to gobble down the treat, and then he would start growling and barking at the other dog again.

When Indy became highly strung minded like this, the next step was for us to walk him the other side of the road from where there was a dog that we knew he didn’t like. And when we were approaching a dog that we didn’t know, I would put myself between Indy and the other dog, while rewarding Indy by talking to him with high pitch ‘Good Boy Indy’ – once the other dog had walked by and Indy had well-behaved, he would then get one of his favourite treats.

General speaking, I believe that reward based training is ideal for Borders. It touches to the core of what is very dear to a Border: food. And for food Borders will do everything!

Yes, it’s true, sometimes rewards are not deterrent enough to stop your dog from misbehaving. In that case, you may want to adopt one of the other techniques.

Personally, I do not particularly condone such pain inflicting dog training equipment available on the market. I go by the principle of never do to a dog what you would not do to your own child, or you would not want to be done to you.

I do look up to ‘dog whisperers’ such as the lovely Cesar, as in his shows you see him literally perform little miracles with dogs that nobody would want due to their really bad behaviour.

But, even if extremely stubborn, I don’t believe Borders need extreme training. I found, through my direct experience with Indy and after reading and researching so much about Borders, that Border Terriers are very well-mannered dogs, always friendly with humans (including children) and mostly with other dogs too.

And remember, as Borders love their humans deeply, they become even more easily trainable as they will do anything and everything to please their human family.

So, what are you waiting for? Start training your Border today. Be gentle to your Border, and your Border will reward you with gentleness too.

This is a call out to all Border Terriers owners out there. Have you had particular problems training your Border? Or have you used any specific techniques? Leave your comment below to tell us how you managed to get the perfect Border.