Here at Living With A Border Terrier, Indy and I did not want to miss out from bringing to your attention an unprecedented event. Yes, it’s true, for the first time a Border Terrier has been nominated in the Friends For Life category of Crufts Dog Show 2018!! Why I am telling you this? For two reasons really:

So, without further ado, let me tell you a little more about Jack’s story.

Indy and I have been following Jack Spratticus and his mum Vanessa for quite a few years through Twitter (check out their account here: Sir Jack Spratticus) as they are part of the lovely and supportive Twitter #BTposse community.

I knew that Vanessa has been battling with mental health issues for quite a few years, and that when she had to spend time in hospital, Jack would visit her regularly.

What I was not aware of is that Jack too has canine mental health issues which he battled with at the beginning of his life.

By the time Vanessa adopted Jack from Border Terrier Welfare in 2012, Jack was 13 months old and had already been turned down by three previous families. Because Jack was deemed to suffer from fear aggression, where he was unable to socialize with other dogs but also with humans.

In the Crufts video Vanessa admits at first she did wonder whether she would ever be able to turn Jack’s destiny and to help him unleash the nice side of him.

But what kept Vanessa going was the fact that she felt this connection with Jack as, like her, he sounded like the most unwanted dog by society, as he too, like Ness, was unable to build close relationships with others.

It took Vanessa the good part of a year to start gaining Jack’s trust, and before being allowed to start training Jack and to take him to rehabilitating classes.

Lo and behold, through intense obedience, agility and heelwork to music, Jack and Vanessa are now promoting their journey together in an effort to break down stigma attached to mental health illnesses. Not only that, but Jack was accepted Canine Generated Independence last year and has nearly completed his training course to become Vanessa’s assistance dog.

Border Terriers Are NOT Untrainable

These accolades are more so valuable when we think of Jack, because if you are a Border Terrier owner, you will agree with me that Borders have a natural sense of independence. So, for argument’s sake, when the music starts and you have just trained your Border to play dead, (s)he may not do what (s)he has been taught if something else catches his or her interest, or if they just don’t feel like it.

What Vanessa has achieved with Jack is something that I shall look up to for the rest of my days. Turning a dog with fear aggression traits to an amiable and sociably safe dog is not an easy task. In fact, with dogs showing fear aggression most of the times vets and canine behaviourists are the first ones to give up and recommend … well, for lack of a better word, yes, they recommend euthanasia, or as I call it, ‘induced death’.

But at the same time Vanessa has shown all the ‘doubting Toms’ of this world that Borders can be trained. If in my many articles on Border Terrier personality traits I keep mentioning the strong personality of these dogs, and their first for independence – which makes them ever so much closer to a human behaviour than to a canine one -, it is also true that Borders are a highly trainable breed.

I am not the best and most experienced in dog training, but I cannot help but stress out how Borders are a contradiction of their own self. Yes, they love to be independent and to rule their human household, but at the same time they are the one of the most adaptable breeds of dogs, always ready to please at the end of the day. The trick with Borders, I suspect, is that they must be made to believe that there is going to be something in it for them to make that obedience effort worth it. And food is the greatest motivator.

I am sure, with Jack’s initial problems, it took Vanessa far more than a few treats to turn his behaviour around. In fact it was Vanessa’s commitment to training Jack consistently that has enabled Jack to be finally recognized as dog assistant in aiding Ness in her every day chores as well as in her mental health recovery.

How Can A Border Terrier Help

We have all at some point watched on telly how helpful a dog can be for disabled owners. Think of guide dogs for blind people. They are trained from pups to live with a blind owner, and we all know how they become the eyes that their owners cannot use, and assist them in and outside of their homes.

But how could Jack help Vanessa? How can a Border Terrier, who likes exercises and play time, and who is so highly motivated by food, help a person who is affected by mental health issues, such as borderline personality and eating disorders?

In my very little experience of mental health issues – yes, I am prone to anxiety and depression – my Indy helps me, and has helped me for years, in the same way as my son helps me. They both are the reason to get out of bed in those days when you wake up and you know it’s going to be a difficult day.

Both my son and my Indy gave me a reason to get going. Because, no matter how paralyzing my anxiety has been at times, to the point of me not wanting to get out of bed, or to curl back in bed, when my son needed me, I had to get going. Likewise, when my Indy needed food, or it was time for walkies, I had to get going and prepare his meal, or go out for walkies. And then, once out with my Indy, my mind would be taken away from the anxious thought and would occupy with a different train of thoughts – thoughts about embracing the beauty and the fun of walking with my dog in the woods or to the shops.

I am sure I am not the only one to have found solace in the comfort my Border has given me. Maybe you want to drop us a line in the Comment box below, so you can share your experience too.

I suspect Jack was very much help to Vanessa in exactly the same way. I suspect Vanessa found solace in the fact that she felt responsible for Jack, as Jack was the somebody she now was caring for. And Jack was the one ‘person’ in the whole world that did not judge her, but took her at face value. I expect Jack helped Vanessa face up to those ‘no’ days when she had to take Jack out even if she’d have rather preferred lock herself indoors. And, once outside, Jack helped Vanessa come in touch with other people without worrying so much about others’ perception of her own self.

I am sure Jack is still helping Ness with her ongoing battle, but the fact that she and Jack have already overcome so many hurdles and are so strongly campaigning for their causes – give a mentally ill person a chance and give a rescued dog with issues a chance – to the point of being nominated at Crufts, is testament to how determined they are to help each other and to help others overcome the same battles.

I have talked about Border Terrier Welfare UK (or BTW) already in the past.

They are the ones we turned to when we tried to rescue and adopt another Border Terrier as companion for Indy, and for us. As you may know, it did not quite turn alright, but that does not necessarily mean that adopting has to present insurmountable challenges. On the contrary!

Yes, Jack did have problems. But Jack also became that issue for Ness, which she saw as a challenge to conquest – something to prove to others as much as to herself that she could beat. It made that bond between her and Jack an irreplaceable one – as if both understood each other need to get to that finishing line. 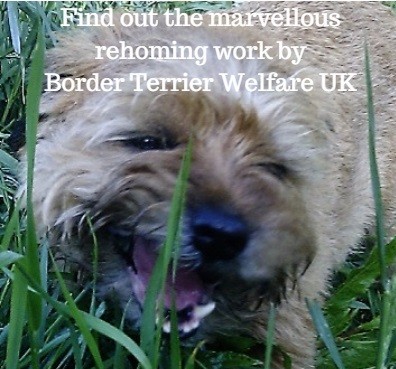 On the other hand, when we tried to adopt Olive, she did not present with any behavioural or physical issue whatsoever – other than the fact that she did not get on with our Indy. And Indy had to come first.

Does that mean that you will come across all these problems if you ever try to rescue a Border for BTW? ABSOLUTELY NOT!!!

In my opinion, rescuing a Border – or rescuing any other dog, for all that matter – does not present any higher risks of encountering any behavioural problem than when purchasing a Border from a registered breeder. Because so many dogs develop problems even if their pedigree is clear of any behavioural trait.

So, before reaching out to your wallet for what I am sure is going to be a very expensive purchase, visit the BTW site and make contact with one of their regional representatives. Not only you could save a lot of money (although BTW asks for a voluntary donation when adopting one of their homeless Borders), but you would give a Border with no family a home for life!

All that rests to me to say is this: go onto Crufts website and vote for Vanessa and Jack as the most deserving Friends For Life winning pair.

Both Vanessa and Jack are not unique in having to battle their own demons, but they are certainly unique in being able to do so whilst caring for each other.

For this reason, they deserve my and your vote. So, do not wait any longer, cast your vote today and any other day till Sunday 11 March 2018 (one vote per day is allowed from the same email account, and no online registration is needed) and spread the word.