In my last post on Alabama Dog Rot I have talked about how dogs – and not only Borders – can contract Alabama Rot by walking in muddy or wet environments. The virus or bacteria penetrates in the dog’s blood stream through his or her paws. But Alabama Rot is not the only issue related with your dog’s paws. Today I would like to introduce you to a product which I have discovered recently, and which will help you with your dog paw problems:

We all know too well how at some point or other of your dog’s life span, your dog will experience sensitivity on his or her paws. Dog paw problems can be a painful experience for your dog as much as for us owners, simply as it is so difficult to treat your dog’s paws, and because, just like with us humans when we have mobility problems, your dog is virtually on his or her four paws nearly 24 hours a day.

Before I tell you more about this wax, let me tell you the idea behind it.

What’s The Secret Of Musher’s Secret

Musher’s Secret first started being manufactured in Canada in 1990, and has eventually been taken over in its distribution by Treadwell Pet Products, who however only sell onto traders.

Currently Musher’s Secret is being distributed in the States, Russia as well as in the countries whose flags are shown in the below picture:

You can imagine how of all places in the world, it would have been Canada to put together such a natural, yet so effective product.

Musher’s Secret Pet Paw Protectionor Wax is ideal to protect your dog’s paws from ailments resulting from walking in the snow for prolonged periods.

But Musher’s Secret does not do only that.

Musher’s Secret has been thought and designed to protect your dog’s paws when:

How Does Musher’s Secret work

Musher’s Secret Paw Protector Was is a cream which works like hair shaping wax for humans. You apply it on your dog’s paws and in between pads and toes, as well as on the fur covering the paw and the claws.

The wax will act like a protective boot, preventing any abrasive material, such as salt or sand, or any harsh weather element, such as snow or ice, or heat from walking over hot surfaces, from affecting the paw altogether.

The strength of this product is, of course, in the fact that it contains solely natural ingredients.

Musher’s Secret Paw Protector Wax has its own website, which you can check out here. The website gives a brief history of this product’s origins and specifies that it does not sell directly to the public, but solely to distributors and to retailers, such as Amazon.

And that’s why this product is available on all geographical Amazon websites.

But what the website also advises is on the content of the wax, and what are its ingredients. Let me show you an extract: 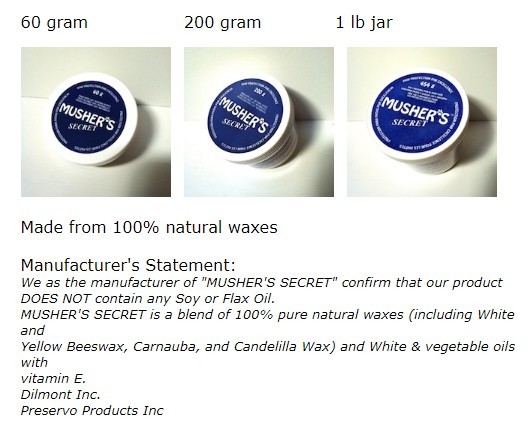 As you can see, all ingredients used in the making of this wax are natural.

In addition, the vitamin E contained in the wax acts as moisturizer and helps heal cracks and wounds on the paws.

In fact, it is thanks to the presence of vitamin E that Musher’s Secret wax is often used on your dog’s nose, when it starts cracking due to severe and extreme weather conditions.

It’s interesting how Amazon.com reviews show pictures by one of their customers who posted pictures of her dog before she started applying the wax to her dog’s nose, and two days after she started the treatment. The results are short of a miracle!

As you can see from the above picture, the wax is sold in three different sizes. Prices therefore vary accordingly as such:

Generally speaking, and where applicable, delivery is also FREE.

Now, it may be deemed that the price is rather expensive for a small pot of wax. However, reviewers on both sites report that you really don’t need to apply much on your dog’s paws to ensure that the paw is protected.

How often you want to apply the wax on your dog’s paws, or any other padded area that you feel may need to be treated against tears or cracks, is up to you.

If you intend to use the wax solely to protect your dog’s paws, then the general consensus is that you rub the wax on your dog’s paws just before each walk. You might need to apply the wax more frequently if you use it as a remedy rather than to prevent damage to your dog’s skin.

For this reason, it is difficult to work out how long a pot may last you. But it appears that, as with all products when you try them for the first time, other customers have purchased a smaller pot at first to see if it worked, and they have then reverted to the bigger size, when they where fully satisfied with the results.

Yes, from Amazon reviews, it appears that this the most highly rated product as a paw protector. And these seem to be the reasons behind it:

The negative aspects that have been raised, by comparison, are controversial and not weighty enough to outnumber the positive aspects. The following issues have been brought to light:

You will have noticed that I haven’t put down my personal rating. That is because, I must admit, I have never had to use this product on Indy since discovering it.

Yet, from what I read about it, I wish I had come across this wax much sooner. Because, at various stages Indy has had inflamed paws – which is part and parcel of dogs who are good walkers.

At one point it kept happening in the warmer months, and I am wondering whether this wax due to Indy walking on hot roads and footpath.

But sometimes Indy has mildly injured his paws after stepping on thorny hedge cuttings, such as brambles.

At the time, we would either massage his paws and try to keep him away from walking for a few hours or days (which in itself is a rather impossible mission for a dog), or we would end up going to the vet and have anti-inflammatory medication prescribed – again, more chemicals (!!!).

Without taking anything away from pharmaceutical drugs and their validity, I do believe however that many times Indy’s mild injuries could have been treated with Musher’s Secret Pet Paw Protection Wax.

If then I think back of how Indy has always hated to wear protective socks to prevent him from licking his own paws, I can imagine how some dog owners may find it virtually impossible to get their hounds to wear the paw boots available on the market.

You may have had experience of this, and may want to share your experience with us? If so, by all means do leave your comments in the below space. 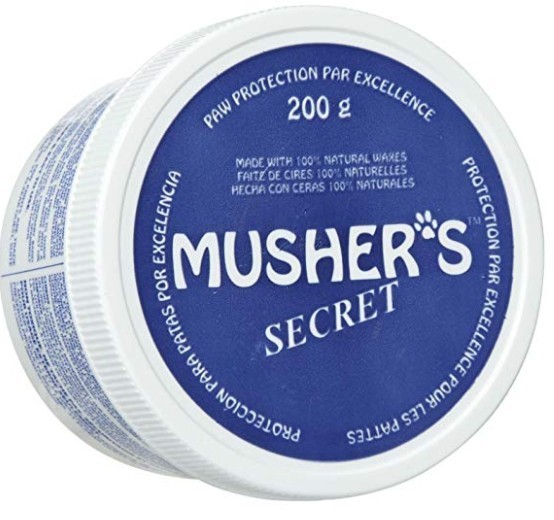 Previous Post: Is Alabama Rot Dangerous For The Border Terrier Breed
Next Post: #5 Top Tips For Travelling With An Older Dog – My Holidays With 14 Year Old Indy