When Indy was put on metronomic chemotherapy, we were explained it was vital for Indy to drink aplenty, so we would avoid him urinary infection, which was the only possible side effect. The problem is that Indy has never been a great drinker. There are many more conditions or treatments which require for your dog to drink regularly. But how to help your dog drink if (s)she is not a drinker?

Available From: Amazon as well as most pet stores

Giving Beer To My Dog???

Well, you can easily imagine this is not your usual human pub beer. In fact, let me make this clear, in case you ever get tempted:

NEVER GIVE YOUR DOG HUMAN BEER

This is because human beer contains high amounts of alcohol, which could be lethal for your dog. Dogs, and their organs, especially the liver, are not designed to take the same levels of alcohol as us humans. Even if those levels of alcohol are rather low by human standards, they are always far too high for dogs. 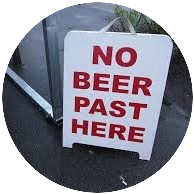 Another ingredient which is not good for dogs is hops, which again you find in the human drink, but not in dog drinks.

Now, I am not a great drinker of beer, so forgive my ignorance, but I had to do a bit of research on the matter.

Hops are the flowers derived from the hop plant, and are used as stabilising agent in the making of beer. Apparently, they give beer that slightly bitter taste. But they can also be used to add fruity flavours to beer.

Your dog is not keen on water?  Why not try this?

It’s good for your dog’s breath, but it also flavours his or her water nicely.

So, why should I go to the effort of finding dog beer for my dog?

Let me tell you why we wanted to try dog beer on Indy.

When we were first told that Indy had to drink more, I bought an array of drinkable stuff: dog gravy, dog wine, you name it!

Each and every of these drinks can be mixed up to his dinner. And, as Indy has always had a healthy appetite, it makes it easier for him to splodge down whatever drink you mix to his meal.

In a way, I feel that we Border Terrier owners are in fact luckier than most, when it comes to encouraging our pooches to gobble down any type of ‘special’ food, drink, or medicine even. Border Terriers, generally speaking, do looooove their food!

But I can appreciate how it may be a little bit more difficult for those dog owners, whose hounds are fussy eaters.

And that’s why I have decided to review this specific brand of dog beer: because I can see that Indy loves it above anything else!

There are many brands of dog beer available on the market nowadays. These types of drinkable treat have become most popular over the last few years, I suppose, as dog owners have always found it ‘fun’ to share human experiences with their pooches – and dog food manufacturers have spotted that gap, and filled it. Nothing wrong with that.

But, another reason why dog beer, or any other types of dog drinks, such as wine for instance, have become more popular is because more and more dog owners have realised these types of drinkable treats aid in encouraging dogs to eat their food, or to take their medications – just like with us and our Indy. Or indeed, to keep your dog hydrated, again due to medical reasons, or simply because the weather is turned hot!

There are many reasons why I started buying this beer for Indy.

The main deciding factor has been, from the start, the fact that Indy likes its taste of course.

We tried another brand of dog beer, Woof And Brew, but Indy just did not like it (click on the picture on the right to check out for yourself).

But Snuffle Dog Beer has many other good reasons for purchasing it for your dog:

For convenience, I tend to order Snuffle Dog Beer through Amazon. But this beer can be easily found in all main UK pet stores.

Now, you will be wondering what to do if you are not based in UK. Well, I believe Snuffle is readily available in other European countries too, and it’s retailed at the same price.

For the overseas friends, who regularly visit this website, I have found a similarly found a very good dog beer on Amazon.com, which I am sure your American Border (or any dog breed, for all that matters) will love this Holiday Season. Click on the below picture to find out more.

The One Complaint With Snuffle Dog Beer

As far as I am concerned, there is only one aspect of this beer that I don’t quite like: the price.

Yes, comparatively with other dog beers on the market, Snuffle comes a little bit dear.

This, I expect, is due to the fact that UK has to import the beer from Europe. But, according to Indy, and to other reviews, the extra few pennies are worth it.

When comparing this beer to other brands, particularly the ones of beers manufactured in UK, it appears that dogs of different breeds will like Snuffle, but will not touch other brands. I’m sorry, UK, we are very good at making human beer, but we don’t seem to keep up in standards and quality with the canine equivalent!

As mentioned, for convenience, I have always ordered my Snuffle from Amazon, which normally sells it in packs of 4. And in doing so, I have never had to pay more than £3 per bottle.

I notice that recently Amazon have changed suppliers, where at present Snuffle is priced higher. I am confident that, as soon as their regular supplier makes more batches available to Amazon, Amazon will be able to reduce the price again.

The perk of purchasing from Amazon, as far as I am concerned, is the fact that I have it promptly delivered to my home for FREE. And to me, saving in precious time and in petrol to make a journey especially all the way to my nearest pet store, is more valuable than anything.

It goes without saying, I just love this little drink for my Indy.

I give it to him in a smaller bowl, twice a day, but only on those days when he has to have his chemo tablet. Which means a bottle can last me for over a week.

Sometimes I have also added it to his dinner, to make it more moist. Again, the beer has resulted in a nice addition, which complemented his mix of kibble and semi-wet food.

The fact that Indy loves this drink so much makes it so much easier for us to have him drink regularly, and to keep him hydrated.

The beer has not affected his urine, nor his liver function. So much so, that when we go to Dick White Referral Centre for his quarterly check up and they test his urine and take a blood sample, they never come back with any unexpected elevated values.

But another reason why, in spite of the price, I still recommend this beer, is due to the fact that it barely contains any ingredients that could trigger allergies or could have an ill effect on your dog’s digestion.

When comparing this beer with others, I happened to notice that other beers, especially the ones manufactured in UK, tend to have same grain-based ingredients that you can find in human beer. I expect this is so as to make the dog owner feel like his or her pooch are drinking proper ‘pub’ beer.

I am not alleging that the ingredients used may be harmful to dogs. I am sure they are not. But by the many reviews I have read, it appears that these types of beer have one common negative denominator: dogs do not like them!!!

So, in my view, what’s the point in spending less, and then having to chuck the whole bottle of beer away because your dog will not drink it?!?!?!

Available From: Amazon as well as most pet stores

You may want to share your experience with dog beer fed to your dog. Or you may not be sure about Snuffle after all. Either way, by all means do leave your comment below, so that together we can grow our knowledge and expertise on dogs and on Borders!